Starting at the Bottom: An Interview with Superior Oil CFO Doug Stewart

Doug Stewart is an example of a CFO who has worked at every level of his firm’s finance organization. As CFO at Superior Oil, a 75-year-old  provider of industrial products and services based in Indianapolis and with 11 locations across the U.S., Stewart has his hands full. But his experience along the way has prepared him well for the task at hand.

In this interview, Stewart talks about becoming a CFO amid the recession, building a relationship with his CFO and how squeezing in a morning workout boosts his productivity.

What was your path to the CFO chair at Superior Oil?

I first started working here out of college at Purdue University, and I was hired as a staff accountant. I moved my way up the ranks after that. I became the accounting manager. Later, our controller retired, and I replaced him. I got my MBA at Butler University. In 2008, we had a major restructuring because we became 100 percent employee-owned, and I became the treasurer and CFO.

It’s kind of one of those stories you hear where someone started pushing a broom, and worked their way up. For me, it’s ended up being home.

To ascend to the CFO’s chair in 2008, amid the Great Recession, must have been challenging. What was that experience like for you?

It’s all been kind of a natural progression for me. It’s not like I showed up at work one day and had all this extra responsibility. I kind of grew into it slowly. Obviously, ’08 and ’09 had their challenges. Our CEO was the CFO, so he has a financial background. So, between the two of us, we were able to orchestrate and implement cost-cutting initiatives that allowed us to ride out the storm.

We cut a few people. We even cut some salaries back until we got through the storm. When you go into a time period like that, if you’re running the business in a way you really ought to, in our opinion, you have the resources to weather that storm. It’s when you don’t do that, and you think you’re always going to be growing, you’ll be in trouble. It’s the companies that don’t prepare and don’t ask themselves “Hey, what if something happens, are we going to be OK”—the companies that didn’t ask those questions are the ones that had the biggest problems

It was teamwork on all of our managers’ parts. I think we came through it fairly well, and probably better than a lot of people.

As a company, our strength as a business has always been important to us. We’re not going to do anything to jeopardize the strength of the balance sheet.

How have you noticed your role change in recent years, in terms of liaising with and leading others outside the finance operation?

I’ve been pretty involved with all functions of our business at every step of the way. I don’t think that my job has changed all that much. We have much more of a team atmosphere when it comes to making large decisions as a company. Many of those decisions involve spending money. Of course, I have a lot of say when it comes to that.

Business has become a lot more complicated than what it was before for us, in terms of increasing federal regulations. I think that’s been a little bit of a challenge. We have to spend a lot more resources on those things that don’t make money, but that you’re just required to do. They build a lot of expense into your business. That’s more how my role has changed, dealing with regulations from bodies such as the EPA, Department of Labor and OSHA.

What’s your best “life hack” for managing your day as a busy CFO?

I used to get into the office a little before 7 a.m. Now, I’m actually coming in a little bit later. I take the time to go to the gym three or four times a week in the morning, and that helps me to manage the stress and gets me off on the right foot. If anything, I’m spending less time in the office than I once was, but with technology, I’m never really away from the office, which is good and bad. If you need to spend time with family, you don’t feel like you’re missing anything, because you know people can always get a hold of you.

I think taking an hour three or four times a week, taking care of myself, will eventually help take care of the company.

How can CFOs do a better job of “managing up” with their CEO?

I’m fortunate, because our CEO has a CFO background, so our relationship is probably tighter than anyone else’s on the team. We come from the same point of view. He and I have a fantastic relationship. He hired me, and brought me up through the ranks.

A lot of people think, “Hey, a salesperson should be your CEO.” But unless you really take every function of the business, especially the financial part, a CEO could really get the company into some bad situations really quick. I’m very lucky in that regard. Our relationship has happened naturally. 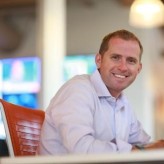